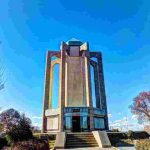 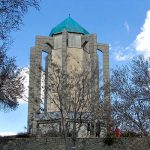 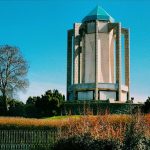 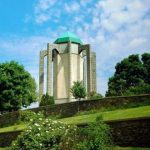 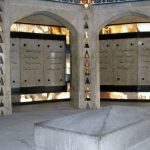 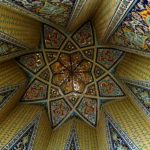 Baba Taher Oriyan, the great Persian poet, lived in Hamedan in late the 4th and early 5th AH centuries. The influential poet and mystic was buried in the same city.

His tomb structure dates from the Seljuk era; in the 6th century an octagonal brick tower was developed over his tombstone.

When Reza Shah Pahlavi governed Iran, some measures were taken to restore the famous poet’s tomb but it was still incomplete.

In 1950, the unfinished job of restoration was carried out and later on in 1966, the new architecture design was developed by the great Iranian architects, Hushang Seihoon and Mohsen Forooghi, who appreciated modern architecture and admired ancient structures. They managed to combine them both astonishingly and expose to view a glorious yet strong edifice.  The tomb stands in a rectangular square, over a hill.

Inside the building, some magnificent tiling works catch the eyes of viewers. Also of note are 24 inspiring couplets marvelously inscribed on 24 pieces of white stone and marble.

The square-shaped building with dimensions of 100 by 100 m, beautifully embodies elegant Persian architecture to interested visitors.

The nationally registered historic site, boasts granite floors and stairs and eight pillars connected elegantly to the main part of the building as well as the striking turquoise dome.

As for his naming, Baba was a penname given to great pious figures and Oriyan, literally naked, implicitly means his detachment from worldly, mortal belongings.

The great Persian couplet composer was highly respected by the Seljuk king Tughril. The world-known poet has intelligently put his birth-date in one of his famous couplets, in Abjad letters, based on first four letters in the old Arabic alphabet, which was decoded by Mirza Muhammad Khan Kokab which shows 326 AH. He died in 85. His delightful poems in Lori dialect, memorized by many poem lovers, express deep moral concepts which are still practical and helpful in this modern age.