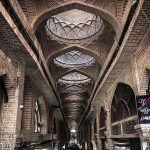 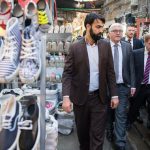 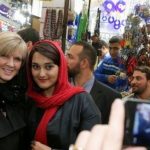 The Grand Bazaar, declared as the most beautiful place in the city by many diplomats in the late 19th century, has gone through many ups and downs throughout history; it has been important in all the country’s major historical events. Actually, it played a significant role as a great social center when the campaigns of the Islamic revolution were sparked.

The Grand Bazaar’s unique and intricate architecture includes labyrinthine corridors, Zarbi arches (traditional ceilings in the old structures), a confusing maze of lanes and traditional ventilators. All are part of the beauties of Tehran’s trading center. Developed and expanded over many years, parts of the bazaar were covered for shade due to the harsh summer heat. Developments in sections such as tea-houses, Zoor Khaneh (a kind of gym where traditional Iranian exercises are done), Hammam (public bathhouse), SaqaKhaneh (where passers-by would drink water in small metal bowls) and Hosseinieh (where countless number of people gather to commemorate the martyrdom anniversary of Imam Hossein PBUH) have made it well worth a visit.

Today, the Grand Bazaar with all its complicated lanes, markets and service-offering places covers an area of almost 105 hectares.

Now let’s go through some of the most notable historical sections of the bazaar:

One of the old parts of the bazaar, in the north, which dates back to the Safavid era, Sabzeh Meidan was developed at the order of Amir Kabir, an influential historical figure, in the Qajar era. On the southern side of the square stands a gorgeous entrance.

As you stroll around the bazaar, you will notice partly damaged brick arches and domes, some of which are restored. The plan to restore and rebuild the bazaar has been under way in the last couple of years, and measures have been taken to improve pavements, sidewalks, domes, and ceilings, and to strengthen the whole structure.

The striking Chahar Sogh is located near the Jameh Mosque.  It contains a short ceiling decorated with stucco, built in 1807 and is the most crowded place in the bazaar.

Among other interesting and historic sections is Saray-e-Amir, which was built with personal finance from Amir Kabir and assistance of Sheikh Abd Al Hossein, the pro-constitutional cleric, about 1851. Also a mosque and school were built and named after Sheikh Abd Al Hossein.

The nationally registered Imam Khomeini or Jameh Mosque, known as Shah Mosque in the past, constructed when Fath Ali Shah ruled the country about two centuries ago, is another must-see spot.

Near the Jameh Mosque lies a Timcheh known as Hajeb al-Dawleh which enjoys spectacular architecture; it was built by Haj Ali Khan Hajeb al-Dawleh when Nasereddin Shah was the king. Although a brand-new commercial center has been established inside the Timcheh, the glamour of the architecture is still noteworthy.

Also of note is Mahdiyeh Timcheh, located in the south and nearby Sabzeh Meidan Square, at the beginning of the shoemakers’ and cobblers’ lane. It is covered in Zarbi and Yazdi architecture styles, a dome-like structure which appeals to visitors and sightseers.

In the bazaar neighborhood at the end of the clothing lane, known as Amir Bazaar, lies the Mausoleum of Imamzadeh Zeid which ranks third in popularity among Tehran’s holy pilgrim sites. Imamzadeh Zeid was the grandson of Imam Hassan Mojtaba PBUH; merchants pay visits to the reviving shrine and ask for enhancement in their income.

The foundation of the sacred mausoleum dates back to the year 1489.  This is mentioned on an antique box on the tombstone.

The mausoleum was highly respected before the Safavid dynasty like the mausoleums of Sayyed Esmail inside the bazaar and Yahya, nearby. The building was expanded and restored during the Safavid, Zand and Qajar eras. Surprisingly, the whole building and its foundation were built with the efforts by Asiyeh Khanom, the mother of Fath Ali Shah.

You will see an inlaid door between the shrine and the main building which was carried out by skilled artists in 1884.  An inscription on top of the wooden door reveals Kamran Mirza played a great role in developing the building. Visitors to the mausoleum are stunned by the exceptional mirror work and exquisite tiling.

In all, a journey to the Grand Bazaar of Tehran will be a pleasant, memorable experience, where you can enjoy ornate architecture and structure as well as shopping in fancy stores and fashionable boutiques.