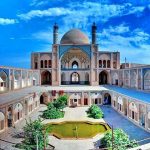 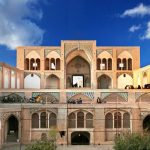 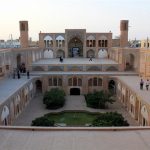 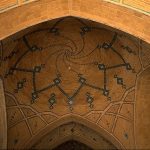 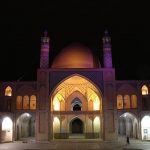 Kashan, in Isfahan Province, highlights Iran’s culture and civilization cradle. Known as Darolmoemenin, the city is home to many scientific and literature figures and scholars. Molla Mahdi Naraghi, better known as Agha Bozorg _literally meaning a nobleman, was a legendary, admirable man who proclaimed Jihad once the Russians raided the north of the country.

One of the most splendid mosques in the country, carrying his name, Agha Bozorg Mosque was built by the Iranian craftsman Ustad Haj Sha’ban- ali and finances from Haj Mohammad Taghi Khanban in the Qajar era to hold prayers and preaches.

The massive brick mosque boasts delicate works of architecture which makes it a must-see attraction.

The 2-stoery monument holds vestibule, corridor, minarets, courtyard and wind catchers, all a valuable attraction by themselves. On the upper floor there are chambers where clerics gathered to learn theology.

The beautiful entrance of the mosque catches your eyes right in the beginning of your visit. Ornamented with gorgeous stucco and intricate Muqarnas, an architectural style for decorating vaults and arches, and elaborate tiling, the building takes you back into the amazingly-constructed structures in the Qajar period.

The mosque also contains fountains amid the courtyard and a beautifully designed dome with spell-binding ceilings.

One of the greatest architectures in Iran, the edifice’s wooden portals interestingly carry 6666 nails, representing the number of verses of the holy Quran. The surviving doors after 180 years remain untouched; it is said that the nails were put to save the residents against the attackers who invaded there with ax. Nails also would rust which kept termites away.

Make sure to pay a visit once in Isfahan to soak up the indescribable tranquil of the mosque.