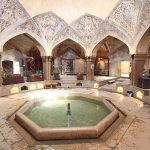 Arg-e Karim Khan, a legendary citadel, was constructed in Shiraz at the order of Karim Khan, the founder of the Zand dynasty in 1108 AH. The great citadel is erected in the center of the city, on Karim Khan Street.

The most prominent structure of his dynasty attracts many travelers from home and abroad each year.

In 1108 AH. Karim Khan invited a selection of the greatest architects and artists of the time to start its construction. They did a wonderful job in a remarkably short period of time.

The whole place in an area covering 12,800 square meters, includes four 12-m walls of stone and plaster. The military design of the building with strong, tall walls sheltered the soldiers times of war. A trench dug outside the walls is evidence of its military purpose in the past.

The three-storey towers contain spiral staircases, used for soldiers to come and go. There are two chambers in the towers; one was a military barracks to accommodate the soldiers, and the other an armory to hold weapons.

Over the years the impressive citadel served many purposes: as a king’s residence, local emperors’ house, and prison.

Now, let’s take a look at the residential parts: they are located on the north, west, and south sides of the citadel, each with a two stone- pillar-portico. There are also six rooms on both sides decorated in splendid works of Muqarnas, a form of ornamented vaulting in Islamic architecture. In front of each portico lies a rectangular pool, whose water was supplied by the Rokn Abad subterranean canal. Once the canal was damaged, feeding was impossible. It is said that the water was of the purest quality.

A notable aspect of the whole structure is that all rooms are linked. What’s more, the citadel’s north part was best used for cold seasons and the west with a large pool in the front worked well in all seasons, particularly in summer.

The eastern part, where the entrance door stands, is embellished with a great picture in tiling work, depicting the battle scene of Rustam and Div-e Sefid, literally white evil. It also holds the private bathroom of the king along with a series of facilities.

The architecturally significant citadel showcases amazing works of art by the most proficient masons, architects, and artists, working with high-quality construction materials.

The castle itself is a rectangle with four 15-m brick towers. The architecture was inspired by that of Isfahani, featuring delicate, subtle internal decorations opposed to the ornaments of harsh and simple external walls.

The halls are adorned by colorful wood-framed windows. Their ceilings are decorated in impressive plaster Muqarnas.

The walls are basically of stone and the whole building is of mud-straw. For internal decorations, plinths of precious marbles from Yazd and Tabriz are used and large mirrors from Russia, Turkey and European countries reflect light inside. The paintings in rooms often depict plants and flowers, as well as the best Eslimi designs.

The nationally recorded site was restored after the tiles and paintings had suffered damage over years. And Arg-e Karim Kham is now ready to embrace travelers wishing to see an incomparable historic site.