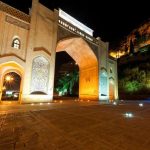 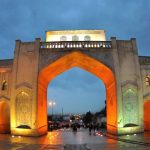 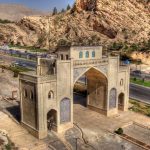 Situated in the northeast of Shiraz, in a space between Chehel Magham Mountain and Babakoohi, only 1000 m from the great Persian poet tomb, Hafez, Quran Gate embraces visitors to the historic city of Shiraz.

As a divine symbol representing the blessings of the holy scripture in human’s life, it is one of the precious Islamic sites across the country.

The structure boasts distinctive Iranian architecture, and leads you straight into the city.

The holy building was built at the order of Azedoddoleh Deilami and was named “Quran Gate” to create a sense of spirituality and peacefulness for Shiraz visitors.

The arched building went to ruin over time. But Karim Khan-e Zand, a dedicated king, rebuilt it, putting a tiny chamber right on top of the construction. He finished his great job with placing 2 divine scriptures of Quran inside the chamber.

The scriptures were transferred into Pars Museum later on.

During Qajar era, the structure suffered damage due to several earthquakes. Mohammad Khan Zaki restored it once again and on its both sides checkpoint booths were also built.

The building was there until 1315, solar calendar. But then it was torn down with dynamites to develop the city under the municipality.

The current gate was constructed by a merchant, named Haj Hussein Igar, in 1372. It was a little bit down the previous structure.

The new gate was larger and included some noticeable improvements.

Verses of the holy Quran are carved in Sols and Naskh all around the historic structure.

People and visitors truly believed in its sanctity and spirituality. According to an ancient tradition, Shiraz residents gathered around the gate on the first day of lunar years and passed through the gate to guarantee a stress-free and joyful year. In fact, it was believed to have a divine, magical strength to protect their lives against disasters and diseases.

Today, the sacred Quran Gate has still preserved its blessedness and saintliness. What makes it more fascinating, is the lush environment around. It is encircled by charming plants and colorful flowers which make it a pleasant spot for refreshment and composure.

What’s more, there is a pretty peacock statue nearby where visitors stop by to take some beautiful photos.As an entrance to the city, the consecrated gate welcomes tourists from all over the world.