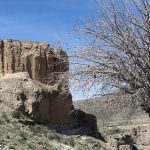 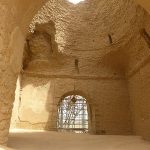 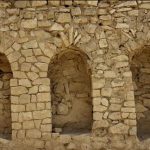 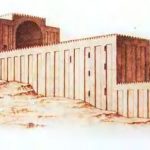 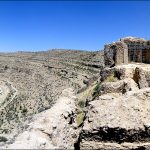 Qal’eh Dokhtar Castle is erected in Fars Province, nearby Firoozabad-Kavar road, on the slopes of a mountain overlooking the roadway.

Georgina Herman in her book titled” Revival of Art and Civilization in Ancient Persia”, writes that Ardeshir of the Sassanid has probably built the castle at the end of the Parthian era in 209 AD.

In other words, the castle symbolizes the Sassanid power and downfall of the Parthian empire.

Built in 3 distinctive levels, the building’s entrance lies on the lowest level through a spiral stairway which leads to the main courtyard, encircled by arched rooms on its 3 sides and the fourth was linked to the upper terrace on which the main palace used to stand.

The entirety of the palace atop the building consisted of a large vaulted iwan, a large hall typically open on one side found in Persian architecture, and 2 smaller ones on either side. The large one, 14 m wide, 23 m long, reached a domed central chamber, on either side of which there were additional rooms surrounded by walls in circles.

In a part of the fortification, there is a cave mouth which is believed that it formed a way into Ardeshir Babakan Palace in Firoozabad plain.  In fact, with the enemy’s raid to the castle the confined soldiers could comfortably find their way into the city and supply food and water and enlarge their army.

As for naming, the castle has taken its name from the goddess Anahita, the god of underground waters and purity which according to the Persian culture refers to a noble and virgin girl as the castle, built atop huge rocks, was truly unreachable.

The over a millennium old structure well illustrates Iran’s rich architecture and is indeed worth seeing.