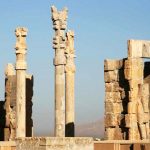 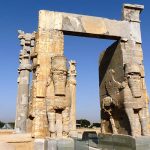 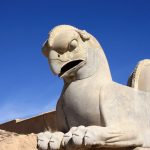 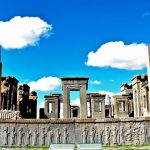 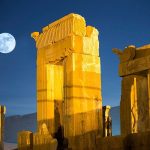 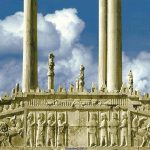 The construction of glorious Persepolis began in 512 BC and took 150 years to finish. Visitors will agree that it was worth waiting for.

Initially Dariush built a high platform on which Apadana Palace and the main staircase of the Tachra Palace were built. After Dariush, his son Xerxes made another palace, called Hadish. He also designed the 100-pillar structure, which was completed by Ardeshir I. Ardeshir III started a new yet incomplete construction. The structures were built over columns of mountain rock.

Very well constructed, the buildings have survived many natural and human incidents; rain, snow, sunlight, earthquake and so on have not affected them much. In fact, the secret of their remarkable resistance lies in the melted lead used to connect all pieces.

The Achaemenes architecture is a combination of Persian art and creativity which amazingly exhibits Iranians’ skill and expertise in building structures both massive and impressive. They were intended to express the magnificence and splendor of Iran’s Great Majesty, and they succeeded.

Centered in Fars province, Persepolis is located 10 km north of Marvdasht and 57 km from Shiraz. It stands on a platform, 8 to 18 m. above Marvdasht Plain. The whole construction, palaces included, covers an area of 125,000 square meters.

The structure’s length equals that of the Acropolis in Athens, but it is 4 to 5 times wider.

The inscription of the Great Dariush, placed on the south wall, obviously indicates there had been no structure there before it.

In late 1312, solar calendar, approximately 40,000 small mud tablets were excavated on which lines were carved in Elamite and Parsi. Further investigations revealed that they were the payment bills, documents signifying that all construction workers, masons, carpenters, stonemasons, and architects, of different nationalities like Iranian, Babylonian, Egyptian, Greek, Elamite, and Assyrian, were fairly paid.

It is believed that after Alexander’s invasion, a massive amount of gold jewelry was looted from Persepolis. A little is now held in Iran’s National Museum.

If you ever ask about the naming, it comes from Persepolis, the Greek word for Parseh plus “polis” for “city.” In contemporary Persian, the edifice is known as Takht-e Jamshid.

The glory of this attractive tourism destination catches everyone’s eye; high-rise columns and marvelous walls with a long history are all a manifestation of Iran’s power and immensity. Excavated after thousands of years in late 1310, solar calendar, the legendary royal compound unveiled a part of Iran’s great history and culture.

What draws your attention at first sight are the inscriptions on Xerxes’ Pathway, in Elamite and other ancient scripts. And once you walk through, you will truly admire precious ancient Persian architecture and arts. As you admire the grandeur and elegance of this historic tourist attraction, you will appreciate the exquisite art of Persia.