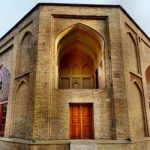 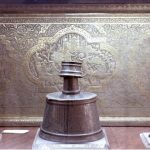 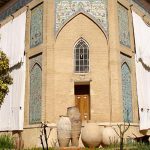 The wonders in Shiraz take much time to discuss, and it’s hard to describe them in a few paragraphs. To experience all the fascination and charm of the old city, you will have to take a trip on your own.

This time around, I am back with another tourist destination, Pars Museum.

Situated in Karim Khan-e Zand Street, the museum is home to invaluable works of art. Many old objects dating from pre-historic, Achaemenid, Sassanid and post-Islamic periods are displayed in the museum.

The building, also known as the large mansion, was constructed in the time of Karim Khan and served as a place for official meetings at the time.

The museum was open to the public till 1350, Solar calendar. After a 10-year pause, and renovation and reconstruction, it resumed its work in 1360. The historic spot was then listed as a historic national site.

Now let’s see what it has to offer.

The octagonal museum contains a central, domed hall inside the mansion. Like many other historic Iranian structures, the building boasts Muqarnas, an amazing vault form in Islamic architecture.

On the west side of the garden stands a huge, cylindrical stone known as the History Tablet. It is inscribed in Sols, Pahlavi and Nastaligh scripts, representing the Seljuk, Safavid and Qajar eras.

On two sides of the building pictures are carved; one side delineates a hunting scene and the other shows the prophet Solomon, throned on a rock.

The external walls are decorated in seven-colored tiles illustrating images of flowers and chickens. Four stone staircases lead to the inner spot.

The exquisite works of well-known painters of the Zand era, such as Agha Sadegh, Mirza Baba Naghash Bashi, and Jaefar, along with drawings of contemporary artists like Sadreddin Shayeste, and Mir Mansoor, catch visitors’ eyes.

The alluring construction attracts many domestic and foreign travelers due to its nice location in the city.

If you ever had a chance to visit, you would notice three historically precious works of art. First is the stone skirt of Kakh-e Khorshid, literally Sun Palace, which pictures two lions. It dates from the Qajar era.

The next is the historic Ramgard inscription, 590 AH.

And last but not least is the largest historic stone, housed at the end of the garden, which depicts stories from Shahnameh. It is too of Qajar.

The mansion is encompassed by a garden, Bagh Nazar, where a variety of tall old trees create a magic land for visitors. The surrounding garden is a place of composure and exhilaration. Breathe in and out to experience pure fresh air away from the smog and exhaust fumes of modern cities.

Stroll the trails lined with trees and sweet-smelling flowers, which create a heavenly atmosphere you can hardly ever find elsewhere. And don’t forget to take some memorable photos to show friends not as lucky as you. Bon Voyage!