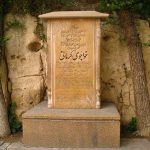 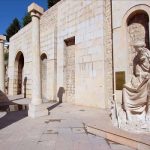 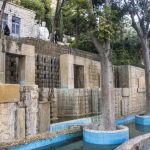 Kamal Aldin Abu Ata, known as Khajuy-e Kermani, born in 682 AH in Kerman, left his hometown to visit Shiraz and then moved on to Isfahan, Baghdad, Tabriz and Khuzestan. He was kings’ favorite poet. He died in Shiraz in 753 AH.

His tomb in Shiraz is visited by many literature lovers and travelers. Located in the north of the city, at the beginning of Shiraz to Isfahan road, the tomb was developed by finances from Fars Culture Department. The tomb lies in an open space; in the middle stands a tombstone on top of which there is a verse of the holy Quran in Sols script, saying:”  All that is on earth will perish”. The well-constructed tomb overlooks the holy Quran Gate.

A little further from the tomb, there are 3 caves; one was used by the well-known poet to worship God, the next is where the tomb of Khajeh Emad Aldin Mahmud lies. Near the cave, there is a prominent stone carving which displays the battle between Rustam and a lion. Next to it, there is another unfinished carving work showcasing Fath Ali Shah of Qajar along with his two sons. On either side of the latter carving stand two half columns built based on the architecture of the Zand dynasty. No information is available about the third.

In 1370, solar calendar, the literature department of Kerman University held a commemoration ceremony for the popular poet in Kerman and decisions were taken to expand the building. Then Shiraz Municipality and Fars Governor attempted to restore the construction and therefore, the floor was reconstructed and a series of stone columns were developed as well. Also, a bust statue of the poet was placed there.

The inspiring place for art lovers and enthusiasts boasts a marvelous spring running nearby which enriches the splendor and grander of the atmosphere.