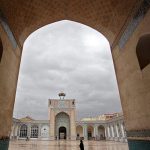 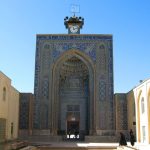 Jameh or Mozaffari Mosque in Kerman, on Moshtaghiyeh Square, is among the works by Al-e Mozaffar dynasty which has undergone some restoration and additions over many years. According to the original inscription of the main entrance of the mosque, it was built in 1349.

Among the historic treasures of the old city of Kerman, the edifice boasts intricate Persian and Islamic architecture. The most invaluable part of the building is exposed in the gorgeous tiling of mihrab, a wall niche in mosques in the direction of qibla, in Mecca.  On both sides of the mihrab, elaborate Muqarnas in vivid colors of golden, white, turquoise, black and azure is viewed.  Also on two columns on either side of the mihrab, the name of Ali has beautifully been worked with lattice bricks; the bricks here somehow resemble those in famous Soltaniyeh Dome, in Zanjan.

The mosque holds 2 portals, one opens up to Moshtagh Square and the other to Shariati Square.

It also contains 4 iwans; the north ones are higher than those in the south. The noteworthy tiling in the south iwans catches the eyes of the sightseers with their splendid 7 colors; surrounded by an inscription in Kufic script. Hexagonal tiles, 1.5 m in height, are adorned with a golden and black strip, and towards the ceiling brickworks are seen.

On the west side of the religious monument, stands an iwan, its original structure from Al-e Mozaffar which was restored with new additions later on in the Safavid era, Shah Abbas II to be exact.

Of note is the expansive courtyards. Built on a symmetrical form, the mosque consists of the east and west iwans as well.

According to historical documents, its solitary minaret was recovered in 1762. Although restoration and alterations have been inconsistent, the building is unique in terms of its large scale and artistic tiling. 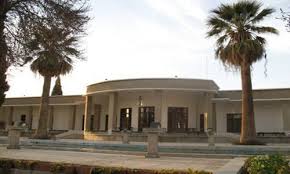