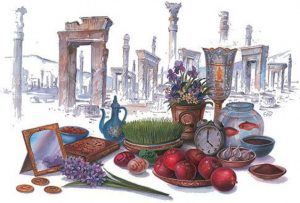 Making the most of Nowruz Handicrafts showcase the cultural identity, customs, and artistic skills of people of a particular land. Exquisite handiworks made by proficient men and women are ever-increasingly becoming popular to adorn houses even in this modern world. In fact, although in today’s start-of-the-art world, everything is done by the leading-edge devices and gadgets to expedite and ease things, handiworks have still maintained their glamor and allure.

Kashan, a civilized city in Isfahan with its 7,000 year-old history, features delicate, admirable handicrafts; some of them are not found anywhere in the world.

In Kashan you should look forward to being surprised by a plethora of crafts presented in kiosks and stalls or simply by peddlers.

Turquoise, azure tiles are popular in the city and you can witness elegant tiling in historic architectures.

The craftsmen of Kashan have surpassed in carpet weaving, rug making, embroidery, chiseling, metal works and many other decorative arts.

Among the leading cities in arts and crafts, Kashani artisans have managed to get twelve UNESCO Seals of Excellence for Handicrafts as well as 3 national medals.

Fortunately, the craftsmen in Kashan have helped families to boost their economic status as well, creating job opportunities.

In the city you can look for workshops where trainees can learn how to make handicrafts on their own at a professional level. Courses are held either free of charge or at affordable rates.

On handicrafts shops, primarily in the bazaar, you can get handsome souvenirs which range from shawls, to scarves, clothing, footwear, curtains, Sjjadeh_ a ribbon embroidery piece of cloth for prayers, pottery, and ceramics, to toys, bags, and carpets with spectacular designs.

Visiting Kashan must be a memorable experience not only for tourists but for those who get a highly-valued piece of handicraft from them as a keepsake.