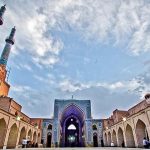 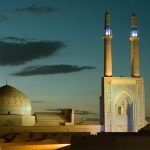 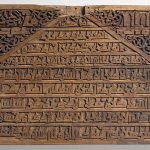 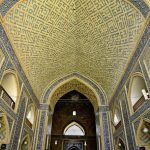 According to the historical documents, the construction lasted for almost a century in different eras, Ilkhanate, Safavid, Timurid, Al-e Mozaffar, and Qajar’s.

It is believed that the astonishing piece of architecture was first founded by Amr Bin al-Layth Safari but the most influential person behind its development was Alaoddoleh Kalenjar, the governor of Yazd at the time, from 474 to 498, solar calendar.

The great mosque contains 2 exclusive high minarets, with an approximate height of over 52 m, from the floor to the top, attracting numerous visitors from around the world. The impressive and exquisite tiling works in charming turquoise and strength and robustness of the minarets don’t fail to surprise tourists. They get thinner as they go up. There is only one staircase to lead you up there. These beautiful slender towers were built by the Safavid. They fell down in 1313, solar calendar, and were firmly restored later.