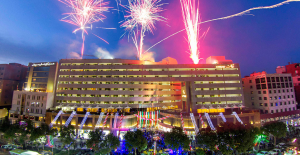 Situated south of the holy shrine of Imam Reza PBUH, the pilgrim site is a divine, spiritual place for Muslims.

Taking almost 12 years to finish, the monument was built at the order of the Empress Goharshad, the daughter of Amir Ghiyaaseddin and wife of Shah Rukh in the Timurid era in 1418. Commissioned by the famous Iranian architect, Ghavamoddin Shirazi, the building boasts an exceptional Timurid style architecture.

As the largest and oldest mosque in the Razavi complex, it is a spotlight for holding daily prayers. Influenced by the oriental architecture, the 4-iwan building with eye-catching arches and minarets is a remarkable artistic site. Featuring Muqarnas, a form of decoration for arches and vaults, and strikingly-patterned walls along with sumptuous stucco and mosaic works, it exposes one of the peerless art works in the heart of the holy shrine.

You will be astonished by the exquisite tiling; tiles with significant colors, turquoise, azure, brown, yellow, green and white, are inscribed intricately by the verses of the holy Quran. The historic inscription in Sols script by Baisnaghar, the son of Goharshad and one of the greatest calligraphers of the time, is seen on its head.

The mihrab, a niche in the wall of mosques directed at qibla, in Mecca, is from fine marble and elegantly decorated in Muqarnas. Its dome is 41 m high and decorated in enamel brick and Kufic scripts. The peer 43-meter high minarets are also inscribed beautifully.

The monument went through damage over many years; an earthquake inflicted damage on its iwan and also the invasion of the Russians harmed the mosque but after renovations it still attracts many national and international pilgrims.

All year round, visits are possible to a religious treasure where you can enjoy the peaceful, spiritual ambience and admire the architecture grandeur.