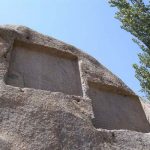 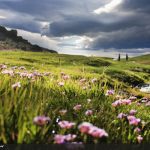 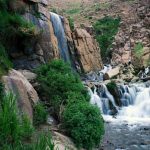 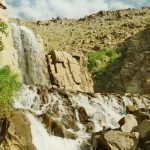 If you plan to visit Iran to experience its rich history and culture, one attractive destination on your must-see list would be Ganjnameh. It’s recreational, historical and natural so you wouldn’t want to miss.

Located in Hamedan, in the west of the country, Ganjnameh’s stone inscriptions include royal proclamations of Dariush and Khashyarshah, Xerxes,  of the Achaemenid reign, carved on the rocks of Alvand Mountain. Five km west of Hamedan, at the bottom of Abbas Abad Valley, the scripts are inscribed on three 20-lined columns , written in ancient Parsi, Ilamite, and Baboli.

The inscriptions were given many names over years; among the most prominent are Dadbehan Alvand Inscriptions,  Ganjnameh, and Jangnameh. The two latter names were common over recent centuries. They narrate anecdotes of treasure search and the valor and courage of the Persian kings many years ago.

The inscriptions on the rock face east in rectangular recesses 2.9 m long, 1.9 m wide and 30 cm in depth. On two inscriptions, lines are seen that are in ancient Parsi, Baboli and Ilamite languages.

On the left side of both tablets, Parsi lines cover a width of 115 cm. Baboli is right in the middle on each tablet with a narrower width. Ilamite is on the right hand side, with even narrower width.

The left tablet sits a little bit above the other and belongs to Dariush the Great. The lower tablet is of Khashayar Shah. The three languages contain 20 lines each with about the same concept. The tablets are encircled by organized holes in stones, which indicates there had been metal caps to protect them against wind, rain and sunlight.

Jean- Eugène Napoléon Flandin, French orientalist, painter, archaeologist, along with his friend, Pascal Coste,  surveyed the inscriptions in 1220, solar calendar.  Their efforts were followed by a British explorer, Sir Henry Creswicke Rawlinson, and he managed to decrypt the ancient Parsi cuneiform. It was a key for explorers to decrypt the Dariush inscription in Bistun as well.

The site not only boasts a historical experience for visitors but it is also a recreational resort as well. The 12-m waterfall runs on Alvand heights throughout the year, even in winter. In cold seasons, striking icicles attract many visitors and especially mountaneers and ice climbers.

It is also attractive in hot seasons, and a wonderful spot for rock climbers. Right behind the waterfall, a lush green field of colorful flowers and plants is spread on the slopes of the mountain. Nature lovers pay visits especially in springtime, when everything is new, sweet and refreshing.

What’s more, an air tramway nearby lifts travelers to an amazingly lush spot and provides them with a breathtaking view of all the natural beauties of the scenic resort. Spectacular scenes of the high mountain, awe-inspiring valley and attractive field of Mishan catch the eyes of sightseers.

Accommodation is available. A recreational skiing resort welcomes ski lovers who rarely see snow these days. Other exciting activities include bungee jumping, rock climbing, ranger( keeping balance in air), a bowling alley, and a sledging resort. The recreational resort also offers coffee shops, restaurants, an enclosed amusement park, and a garden, which make it truly worth a visit. Covered and open parking lots are also available for drivers. Ganjnameh is a place where  history, nature and recreation come together.