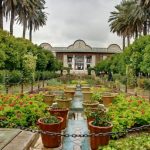 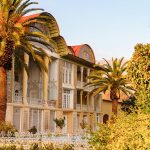 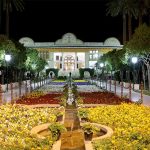 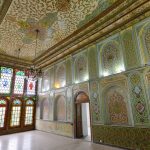 The impressive garden known as Narenjestan (literally “orchard garden”), located on Lotf Ali Khan Zand before Zeinabiyeh Strreet, Ghadir square, dates from the Qajar era when Naser Aldin Shah ruled the country. It was developed at the order of Ali Mohammad Khan (known as Ghavam Al-molk II) and his son (Ghavam Al-molk III). The two parts, the interior Narenjestan Museum and the exterior Zinat Almoluk House, are linked via a tunnel. In the past, the structure served as a department for political and military purposes and as a lodging for foreign guests. The edifice was dedicated to Shiraz University in 1345, solar calendar. It was supervised by the Asian Institute headed by Professor Arthur Upham Pope, a famous Iranologist.

Narenjestan Museum encompasses an area of about 940 square meters of an area of 3,500 square meters on two southern and northern parts. The compound also contains other interesting buildings like Gachineh Bathhouse, Ghavam Husseiniyeh, Ghavam Maktabkhaneh (of Iraqis), and Divan Khaneh. Also there used to be a stable, and a small market which was damaged once Lotf Ali Khan Street was developed.

Once you step into the south building, you notice decorative and art workshops, where you can buy things of interest. Then you enter a splendid pathway facing orange and palm trees. They will lead you to the main building, where light and colors are amazingly combined.

On the left hand side, there is a tea house. To get into the major building, you take stairs on either side of the porch.

There are many small rooms where mirror pieces and inlaid art attract you at first glance.

The ceilings are mainly of wood decorated in beautiful patterns. The principal room is waiting for you; the magical light covers every point, reflected from mirror works.

Right in front of the mansion lies a great pool with fountains, taking you back to old Iran’s architecture.

The basement contains a museum where antique objects are on display. Dishes, coins, pictures and so on all represent a part of Iran’s ancient history.