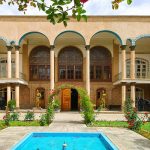 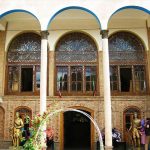 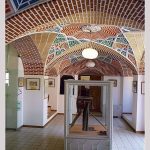 The two-storey building, with an area of 1,300 square meters, was established in 1869, when Haj Vali Me’emar built the beautiful house out of stone, brick and adobe. A personal residence of Haj Mehdi Koozeh Kanani, a liberal merchant, it was a gathering place for the constitutionalists to hold their revolutionary meetings. He contributed to liberalism and helped the freedom seekers financially to better achieve their goals.

When Mohammad Ali Shah attacked the parliament with cannons, the constitutionalists felt fear and danger and secretly sheltered in the large building. Interestingly, it was also the haunt of prominent historic and political figures like Bagherkhan and Sattar Khan.

Located on the west side of Tabriz Bazaar, Constitution House features inlaid doors decorated with Eslimi patterns and flower and leaf motifs, and colorful window sashes which take you back to Iran’s three-colored flag. What is most amazing is the reflection of light through the windows, creating an impressive atmosphere in front of the eyes of visitors.

The building was handed over by the Cultural Heritage Organization in 1998, and was then rebuilt in a way to save its precious architecture.

Transformed to a great historic museum, it currently displays a long array of interesting things: memorable photos of the great revolution and those of Mohammad Ali Shah and Mozaffar Aldin Shah, old objects, constitution-related letters, and the statues of influential figures such as Hossin Khan Baghban, Haj ali Davachi, Thaqat al-Islam Tabrizi, Ali Akbar Dehkhoda, and last but not least Zeinab Pasha, the only female figure among the constitutionalists.

Weapons of the era are also on display on the nationally registered historic site.

This valuable tourism destination is open to public and international tourists throughout the week.