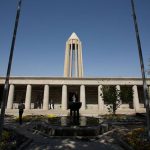 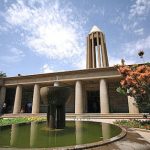 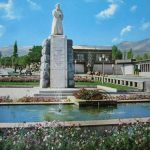 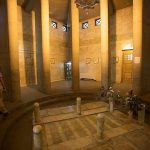 Ibn-e Sina, known in the West as as Avicenna, the most famous Iranian scientist, was born in Bokhara in 359, solar calendar. He was the author of great medical books such as Shefa and Alghanoon Fi Teb.

Abu Ali Sina composed over 200 books on medicine, philosophy, and other topics. He wrote in Arabic, as the common science language, just like other scientists of the era. Later on his precious works were translated into Persian. He has left many works, whose comprehensive list is brought up in his Mosannafat scripts—131 of his original writings along with 111 documents that are attributed to him as well. Abu Ali Sina was also truly important in Persian literature. This said, many of his books were damaged after an invasion of Isfahan.

In the book of Science History, George Sartan calls him Iran’s most well-known scientist.

Now that you know a little bit about him, let’s pay a visit to his mausoleum in Iran.

His tomb, located in Hamedan, is a tourist destination for both Iranians and foreigners. The building, holding his body and that of a friend of his, was a small rectangular structure until late 13thHejri. It eroded over time and suffered damage. Therefore a Qajar princess, Negar Khanoom, decided to restore and preserve the construction. A brick dome was built on top and two tomb stones were placed.

On the northern side of the mausoleum were residential houses and on the south, there was the backyard. A library, inside the tomb, contained 649 volumes of books.

Iran’s National Heritage Association determined to revive the site using both old and modern Iranian architecture. After many designs by skilled architects, one was adapted from Gonbad-e Ghaboos, an amazing architecture masterpiece, which was the mausoleum of Ghaboos Ibn-e Voshmgir, the governor of Tabaretan and Gorgan.

Although the two structures are totally different, the idea of the designer was really smart.

The Avicenna Mausoleum contains 12 columns, representing 12 field of studies he excelled at.

His image as presented in the old Latin books is based on guesswork and speculation. That’s why the association decided to make his statue. The great job was done by the proficient sculptor Abolhassan Sedighi.

Another great thing done was to establish a library nearby. Requests were sent to English, Arabic, and French speaking countries to invite them to deliver internationally scientific books. Foreign publishers cooperated to provide a unique collection of books for the library. A total of 4,342 volumes of Persian and Arabic books are placed there, of which 30 volumes are precious manuscripts. Also, 590 books in French, English, German and other languages are on display in the library.

The surrounding area is filled with lush trees and plants in a semi-circular shape. Abu Ali Sina rightly deserves to be in heaven. So welcome to his heaven!