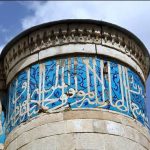 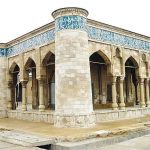 The oldest mosque in Shiraz, the holy building also carries other names such as: Jomeh Mosue, Masjed Alaqsa, Masjed-e Adineh and Masjed-e Jame. The holy mosque is believed to date from the pre-Islamic era. Lying east of Shah Cheragh Shrine, the mosque is said to be constructed in the reign of Omar and Laith Saffari in 281 AH. Over the years, it has been restored several times; it was finally reconstructed during the Safavid era with the help of people and Archeology Department assistance.

The historic establishment in the city holds a high building with a couple of chambers and Shabestans along with 2 iwans.

The mosque carries 6 entry and exit doors; one in north, the other in south, two in west, and two in east. The north entry door, known as Davazdah Imam, carries an inscription on top in Ali Johari script, inscribed in 1031 AH.  The north entrance is decorated with tiles in form of wonderful Muqarnas, an Islamic architectural style. It holds four inscriptions on which the names of 12 Imams are signed.

Amid the north side of the mosque, a high arched structure is raised on its either side two minarets are viewed. The ceiling is in brick Muqarnas.

On the arch, Ala’ala Surah has been recorded with beautiful tile work. Once you get in, you enter a rather long corridor with almost no noticeable patterns and designs. An interesting octagonal pool stands in the middle and two other 12-sided pools are near.

An impressive altar on the direction of Qibla lies inside the mosque along with a 13-stair wooden pulpit beside. On the east side of the courtyard, there is a broad, tall arch; on its top splendid tiling works are seen.

The historic religious tourist destination features unique Persian architecture and art, like many other Iranian mosques. Muslim and non-Muslim travelers will find the sacred place full of tranquility of no like. Urology surgery and treatment in Iran