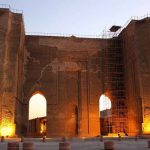 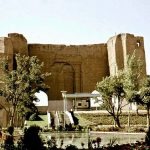 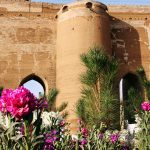 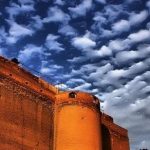 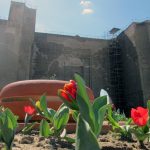 As old as 700 years, Arg-e Alishah is one of the tallest and oldest structures in the city of
Tabriz. The intriguing historic magnet draws tourists and sightseers all year-round. It was a solitary high building throughout the city, 33m in height, visible from quite far. Once a large mosque which suffered extreme damage over years (as a result of many earthquakes and wars), the only remnant is a tall wall, which is now known as Arg-e Alishah. The huge, devastating earthquake, which inflicted serious damage on many structures such as Masjed-e Kabood, caused to tear it down as well.

A masterpiece in architecture, it takes you back to Iran’s old days when architecture and art styles were quite different; gorgeous yet strong. Once the conflicts were sparked between Iran and Russia from 1804 to 1824 and also during Iran and England war in 1857, the building served as a military fortress. At the order of Abbas Mirza, the crown prince of the Qajar monarchs, a garrison, and Iran’s army headquarters were developed in the site, and likewise artillery was built there. In addition, solid walls were built around to make a big citadel.

After constitution era, the Russians invaded Iran and patriotic Tabrizis stood against them in the citadel. When Tabriz was occupied by them in 1912, the Russians blasted the fortification with their cannons, destroying a massive part of the stronghold.

Constructed by Khaje Tajoddin Alishah, the structure was once home to Nejat School, among the first schools in the country. It also used to be a theater at one point in history.

The remaining wall is in fact a part of the large cylinder as the Sabestan, a space in the old mosque buildings.

The tallest brick monument in the city, holds an arch far wider than Tāq Kasrā, making it a distinctive architectural work. Mortar and durable, hardy materials have also been used to create the building.

The arch is at its best in daytime, when you can capture some photogenic views. And you can pay a visit free of charge (at the moment of composing this article).