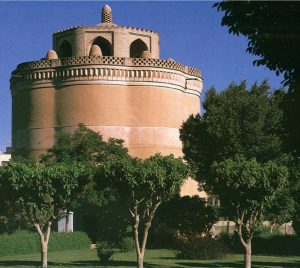 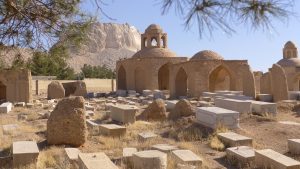 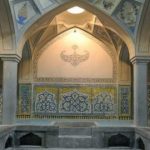 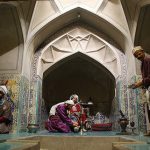 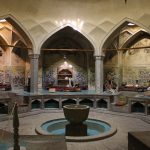 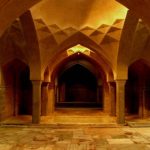 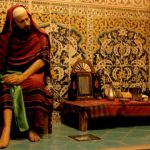 The public bathhouse of Ali Gholi Khan, is a hammam in Isfahan, an old city with gluts of world-known tourist attractions.

Named for Ali Gholi, a courtier of 2 Safavid monarchs who built hammam in 1713, the structure boasts Isfahani-style architecture in late Safavid era. The building composed of 2 large and small hammams as well as a pond, it was parted for men and women’s use. In the old days, people could go to hammam from dawn to noon and then it was time for women to go wash their bodies. Of course, on and off the dignitaries and bigwigs of the dynasty were only allowed in and therefore, ordinary people could use it on no account.

The stone-paved floor building is a Safavid and Qajar masterwork. Plinths are embellished in 7-colored tiles and gorgeous floral and Eslimi patterns. Also Garm Khaneh, where water was heated up by fuels like logs and pieces of coals, is surrounded by artistic tiling works in eye-catching designs. Smokes produced were also directed to the inner place through some pipes installed on the floor; it was a creative design to disinfect and heat the place with no energy waste.

One nice thing about the hammam is its lighting system; with openings on the domed ceiling of the building filled with convex glass pieces, energy waste was taken under control as well and the place became bright and warm enough in day time. In fact, the Iranian designers and architects had come up with an advanced way to take advantage of the sunlight to make the inner building bright enough for use. Another notable thing is that the glass let in the light but once on the roof, it was impossible to peek through, making it a safe place for people.

In places, you will see pieces of white-colored jagged stone with gentle juts which were used for massaging as hammams were, additionally, a place for relaxation and mental respite, apart from its main purpose.

With a switch in functioning, the hammam is now an anthropology museum, where mannequins exhibit how people used the place. At a fair price, you can visit one of the great old constructions in amazing Isfahan.