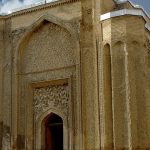 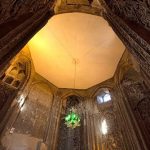 This historic dome stands near Imamzadeh Abdollah Square, in Hamadān or Hamedān.

A precious building, it marvelously unveils one of Iran’s post-Islamic architectural masterpieces. The dome, built in the 6th century AH in the late Seljuk era by the Alavian dynasty, was initially designed as a mosque. Later on it was turned into the mausoleum of the dynasty. Unfortunately there is no accurate information as to the names of the dead. The rectangular tombs, covered in bricks glazed with vibrant turquoise color, are located in a lower level in the basement.

In the past the building used to support a dome which was damaged over time. Nationally registered site, the square-shaped edifice carries a Shabestan (an underground place typical in architecture of mosques and monuments).

Among the outstanding works of plaster and plain brick in the mid-Islamic centuries, the structure in some ways resembles the Red Dome of Maragheh as well as Qazvin’s Dome of Heydarieh.

Four columns, like towers, are seen on its four corners, 9.5 m. in height and with a diameter of 2 m.

The building highlights Mihrab, a niche in the wall of mosques in the direction of qibla, the Kaaba in Mecca, on the south side; it is impressively embellished in plaster, enhancing the beauty of the interior. ‌

The structure has been built to allow in plenty of sunlight.

Every year, this old monument attracts tourists due to its plain yet historic nature.